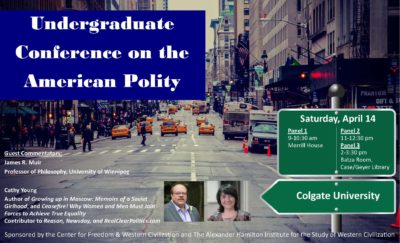 The final schedule has been released for Alexander Hamilton Institute for the Study of Western Civilization (AHI)’s Annual Undergraduate Conference on the American Polity at Colgate University, April 13-14. The event will feature Russian-born journalist Cathy Young and Jamie Muir, a philosopher who specializes in education. The annual conference features outstanding undergraduate research from a variety of disciplines including history, economics, philosophy, anthropology, religion, political science, and sociology. For additional information, please contact Robert Paquette (bob@theahi.org), or Dr. Beth L’Arrivee (elizabeth.larrivee@gmail.com).

5:20: Pick-up for those staying at the Wendt Inn

Title: “The Intersection of Liberty, Identity Politics, and Social Justice in American Life”

9:00: Colgate on-demand shuttle will bring hotel guests back to the Wendt University Inn

*Students should come to the conference having prepared for the group discussion on Saturday by reading Leo Strauss, “What Is Liberal Education,” An Address Delivered at the Tenth Annual Graduation Exercises  of the Basic Program of Liberal Education for Adults June 6, 1959  http://www.ditext.com/strauss/liberal.html

8:20: Pick-up of those staying at Wendt University Inn

“Give Me Stability or Give Me Death”

“Modeling a Gentleman:  Landon Carter and the Virginia Gentry”

“A Ghost in the Machine:  Abraham Lincoln, His Allies, and Presidential Influence on Congress”

“Existential Politics and the National Polarization of Modern America”

“A Glimpse into the Long Run Effects of Government Instituted Discrimination”

“Understanding American Populism:  The Cases of the Kingfish and the Radio Priest”

“Rethinking Sentiment, Self-Evidence, and Reason in the American Imagination”

“Drinking Bleach on YouTube: A Brief Survey of the Online Anti-SJW Community”

5:30: Dinner at Colgate Inn on the Rathskeller (stairs are behind the bar)

Title: “Intellectual Diversity as a Means to Freedom of Thought: Lessons from Logic and the History of Ideas”

Reading: Leo Strauss, “What Is Liberal Education,” An Address Delivered
at the Tenth Annual Graduation Exercises  of the Basic Program of Liberal Education for Adults June 6, 1959  http://www.ditext.com/strauss/liberal.html

James R. Muir:  James R. Muir: Dr. Muir is a professor of philosophy from the University of Winnipeg. His background is in science (physics and neuroscience), and the history of philosophy (DPhil, Oxford). He is interested in the philosophical debate between Plato and Isocrates and in how that debate conditions the historical relationships between political philosophy and educational thought, especially in Islamic, Christian, and Jewish thought. His several articles on the history of educational ideas have garnered a global audience with substantial citations. His book, The Legacy of Isocrates and a Platonic Alternative: Political Philosophy and the Value of Education, is being published in April, 2018. The book “brings together educational philosophy, political thought, and rhetoric to examine the influence of the philosopher Isocrates on educational thought and the history of education, from classical antiquity to the present. He argues that understanding both the dominance of Isocratic educational thought and the real nature of the Platonic alternative will contribute to a much needed recovery of intellectual diversity and freedom of thought in academic institutions. He also argues that academic departments of Educational Studies have been a major obstacle to the study of education generally, and to study of education for diversity and freedom of thought especially.”

Cathy Young: Cathy Young is a contributing editor for Reason magazine, a weekly columnist for Newsday, and a regular contributor to the Jewish Daily Forward and The Weekly Standard. Her free-lance work has appeared in a variety of publications, including the New York Times, the Washington Post, the Boston Globe, the Los Angeles Times, the Wall Street Journal, USA Today, The Daily Beast, Slate, Foreign Policy, Commentary, and Quillette. She was a weekly columnist for The Detroit News from 1993 to 2000, and for The Boston Globe from 2000 to 2007. Young is the author of two books: Growing Up in Moscow: Memories of a Soviet Girlhood (1989) and Ceasefire: Why Women and Men Must Join Forces to Achieve True Equality (1999). She is also a media fellow with the Cato Institute. While her writing deals with a wide range of topics, gender issues and feminism have been a major focus of her work. Her perspective is generally critical of both modern feminism and gender traditionalism, stressing individual rights, empowerment, and equity and fairness for both sexes. In 2001 and 2002, Young taught a class on contemporary perspectives on gender issues as a guest lecturer at Colorado College in Colorado Springs, CO. A frequent speaker on college campuses, she has also been a regular participant in the Battle of Ideas, a unique annual weekend-long event in London that brings together speakers of diverse perspectives for dozens of panels on various issues. She has appeared on numerous radio and television shows. Young graduated from Rutgers University in 1988 with a degree in English.