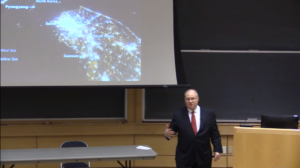 On Thursday evening, November 9, Colonel David Maxwell, Associate Director of the Center for Security Studies and the Security Studies Program at Georgetown University, delivered the Fifth Annual Josiah Bunting III Veterans Day Lecture, “Security Situation on the Korean Peninsula and the Way Ahead.” The event took place in the Kennedy Auditorium at Hamilton College and was sponsored by the Alexander Hamilton Institute for the Study of Western Civilization (AHI) and its on-campus undergraduate fellows program. The lecture honors General Josiah Bunting III, a charter member of AHI’s board of directors. A reception, open to the public, and Leadership Dinner with select AHI undergraduate fellows and guests preceded the lecture.

In introducing Colonel Maxwell, AHI Executive Director Robert Paquette reminded the audience that Hamilton College’s namesake, when barely out of his teens, distinguished himself in battle during the American Revolution and as George Washington’s aide-de-camp. Veterans Day itself, Paquette recounted, began as Armistice Day to mark on “the eleventh hour of the eleventh day of the eleventh month” the end of the First World War, which was hoped to be “the war to end all wars.” The name was changed to Veterans Day in 1954 during Dwight D. Eisenhower’s presidency to honor veterans of all wars. “Nothing could be more foolish,” Paquette observed, “than to think that perfect freedom is possible for human beings. But it is even more foolhardy to think that the expansive sphere of personal freedom for which the founders fought—and which every person on this campus, whether they like it or not, enjoys— can be maintained in this or any other society without the willingness of its citizenry to be educated and vigilant in its defense.” 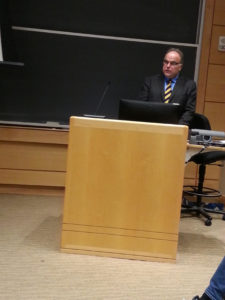 Paquette then spoke of General Bunting’s impressive list of accomplishments both as a warrior and as an educator. A graduate of the Virginia Military Institute, he received a Rhodes Scholarship and studied at Oxford University. During active duty with the United States Army, he served in the United States Army in Vietnam, receiving numerous decorations, including a Bronze Star, Army Commendation Medal, and Vietnam Honor Medal. He taught history at West Point and at the Naval War College. He became President, Briarcliff College (1973-1977); President, Hampden-Sydney College (1977-1987); and Superintendent, VMI (1995-2003). In his spare time, General Bunting published four novels, one that was selected by Time Magazine as one of “The Ten Best Novels” of 1973. He has published a biography of Ulysses S. Grant, several other works of non-fiction, and is working on a magisterial biography of General George Marshall.

Like General Bunting, Colonel Maxwell has a most impressive résumé. He is a 30-year veteran of the U.S. Army, retiring as Special Forces Colonel. He spent more than 20 years of service in Asia, primarily in Korea, Japan, and the Philippines. He commanded both 1st Special Forces Group (Airborne) in Okinawa, Japan, and Joint Special Operations Task Force, Philippines. He has received numerous medals, including the Defense Superior Service Medal, the Legion of Merit, the Meritorious Service Medal, the Army Commendation Medal, the Joint Service Achievement Medal, the Army Achievement Medal, the Global War on Terrorism Expeditionary Medal, and the Korean Defense Medal, He holds a Masters of Military Arts and is pursuing a doctorate in liberal studies at Georgetown University, where he directs the Security Studies Program. The author of numerous articles, Colonel Maxwell also has a blog called the Informal Institute for National Security Thinkers and Practitioners. 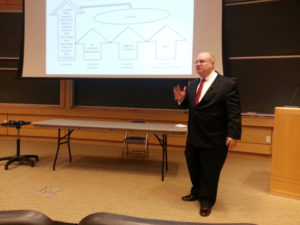 As a leading authority in the United States on North Korea, Colonel Maxwell is frequently called upon to brief politicians and other government officials on the subject. He speaks Korean and has spent decades in Asia. Yet, he began his lecture by underscoring, “There are no experts on North Korea. At best,” he added, “I’m a student of North Korea.” He warned the audience to be suspicious of those who do claim to be experts in the field.

Without question, the North Korean regime is mysterious, monstrous, and unpredictable. The stability of the regime headed by the young Kim Jong-un (now about 33 years old) remains an open question. He did not have time to consolidate power as his father had, said Maxwell, and “I fear that advisors are telling him things he wants to hear.” The regime operates by a rule of terror. Rivals have been ousted in the standard way of the regime, such as by car accidents and drowning and also by more gruesome public spectacles. Visible purges have taken place in the last few years within circles close to Kim Jong-un, including the public execution of his uncle, alleged to have had close ties to China.

Kim Jong-un believes that only the possession of nuclear weapons by his regime will guarantee its survival. The regime distrusts the U.S. and has witnessed the unnerving results of what happened to Muammar Gaddafi in Libya when he gave up under Western pressure its nuclear arsenal. Kim’s regime wants a peace treaty that would require the U.S. to leave the peninsula. The 1994 Agreed Framework for a nuclear freeze in North Korea was based on the assumption that the ruling regime was on the verge of collapse. Its continued survival led to a “sunshine and peace and prosperity” campaign, which also did not work. Then, in 2006, North Korea tested its first nuclear weapon. North Korea still aims to split the South Korea-U.S. alliance. Their tactics include subversion, coercion, and the use of force. Colonel Maxwell left no doubt that North Korea is working with Iran in advancing the nuclear capabilities of both countries. 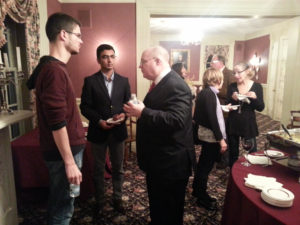 Undergraduate Fellows speak with Colonel Maxwell at the AHI

“We’re still in a state of war,” Maxwell reminded his audience, referring to the armistice that suspended the Korean War in 1953. Today, the North Korean military is probably the most stable institution in the country. Disaffection with Kim’s rule exists within the ranks, but to what degree is uncertain. Defectors have grim stories to tell, and they stress the importance of somehow getting information to North Korea’s common people about the world’s concern for their plight. A regime collapse, Colonel Maxwell noted, can occur either by implosion or explosion, but in any case would likely lead to war. In his power point presentation, he outlined the “Big 5” questions: war, regime collapse, human rights and crimes against humanity, asymmetric threats (such as illicit activities, drugs, slave labor), and unification.

Colonel Maxwell provided multiple insights into the characteristics of the regime and its people. There is emphasis on public displays of power. “If wars could be won by parades, North Korea would be a superpower,” said Maxwell. An enormous amount of money—$800 million—has been spent on statues by the Kim regime in the last few years. A particular challenge to reunification is the fact that it is a very hierarchical society, with 51 social classes. The elite class is based on family history, going back generations. There are also “loyal” and “disloyal” classes. For this and other reasons, the Koreas will be much more difficult to reunify than was the case with East and West Germany. The North Koreans revere long-dead political leaders, especially Kim Il-sung, and consider them to be leaders still. A particular challenge comes from the dedication of the North Korean soldier. When facing capture, soldiers will blow themselves up. 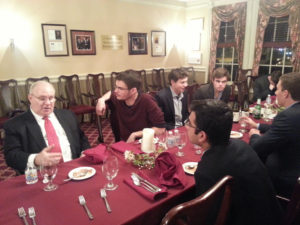 AHI Leadership dinner at the AHI

Although Colonel Maxwell did not mince words about the oppressiveness of the North Korean regime, he lauded the industriousness and ingenuity of the North Korean people, pinning his hopes for a better future in the flourishing of their abilities in a system based on human freedom and private property. To stress the point, he showed a photo of a truck that North Koreans were powering with a wood burning stove aboard the chassis. The North Koreans are hungry for news and culture from the outside world, especially in the form of South Korean news and movies. Consumer goods do trickle into the country, and a black market of consumer goods exists, run mainly by entrepreneurial North Korean women.

Colonel Maxwell emphasized the need for careful planning in preparation for the eventuality of reunification. We need to recognize, he said, that in the process of reunification North Koreans who have lived under totalitarian rule for over 60 years will be like starving persons standing in line for an all-you-can-eat buffet. Gorging what is there could create new kinds of social maladies. “We need to start breaking down the cultural gap,” with such things as the South Korean films that North Koreans love. “We need to start with local governance.” Given that North Korea is a predominantly agricultural society, Colonel Maxwell pointed out, reunification with the promise of converting state holdings into privately owned farms has much to commend it.

Colonel Maxwell commented positively on President Trump’s handling of North Korea to date. He “has talked about human rights more than any other president, and we are quite happy about that. He is getting to them,” he said. “There is a lot of good synergy between the State Department [Rex Tillerson] and the Department of Defense [James Mattis].”