Essays by AHI’s Frisk and Paquette Featured in Chronicles

Chronicles:  A Magazine of American Culture, published by the Charlemagne Institute, has produced a special issue “Remembering the Right.”  It contains eighteen essays, including commissioned pieces on the political theorist Willmoore Kendall (1909-1967) by AHI Resident Fellow David Frisk and on the historian Eugene D. Genovese (1930-2012) by AHI President Robert Paquette.  The special issue, according to the editor, serves to remind a younger generation, subjected to a cancel culture, of the great thinkers who deeply influenced the American intellectual right. 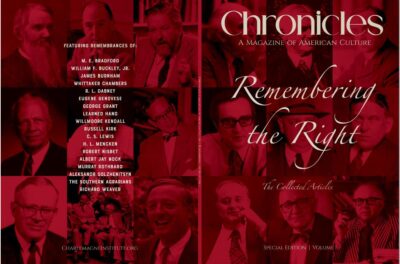 Frisk, who is writing an intellectual biography of Kendall, calls him one of the “conservative movements legendary leaders.” A child prodigy, Kendall taught political science at Yale University, where he mentored William F. Buckley, L. Brent Bozell Jr., and Garry Wills. “Kendall’s intellectual life,” Frisk writes, exhibited “an indomitable integrity,” as he argued with others and within himself on fundamental issues in philosophy and in political science.

Paquette calls Genovese, a charter member of AHI’s board of academic advisers, “one of the most influential and controversial historians of his generation.” Genovese began his career as a Marxist atheist and ended life as an observant Roman Catholic. He published extensively on the history of slavery.  His masterpiece Roll, Jordan, Roll:  The World the Slaves Made (1974) figures prominently in lists of the most important works of non-fiction published in the twentieth century.

Copies of the special edition can be obtained by contacting AHI at bob@theahi.org.