The Alexander Hamilton Institute for the Study of Western Civilization (AHI) is pleased to announce that Joseph Fornieri, Professor of Political Science, Rochester Institute of Technology, will deliver the 14th Annual David Aldrich Nelson Lecture in Constitutional Jurisprudence.  The lecture will take place on Constitution Day, September 17, in RIT’s Carlson Auditorium, Room 1125, at 4:30 pm.  AHI co-sponsors the event with RIT’s Department of Political Science. 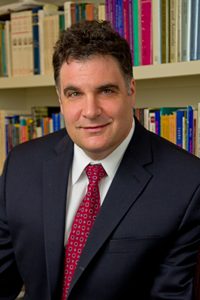 Joseph R. Fornieri, Professor of Political Science at the Rochester Institute of Technology

Dr. Fornieri, an AHI senior fellow and recognized authority on Abraham Lincoln, will speak on “Freedom for the Thought We Hate,” a theme central to his most recent book Free Speech: Core Court Cases (Ashland Press, 2021).  A panel of four RIT political scientists—Lauren Hall, Sarah Burns, Ben Banta, and Sean Sutton—will question Dr. Fornieri after his lecture.  For those unable to attend, a video of the event will be created and posted on AHI’s YouTube site.

At RIT Dr. Fornieri founded the Center for Statesmanship, Law, and Liberty.  His books include (with Sara Gabbard) The Language of Liberty: The Political Speeches and Writings of Abraham Lincoln (2003; revised ed. 2009); Abraham Lincoln’s Political Faith (2005); (with Kenneth Deutsch) An Invitation to Political Thought (2008); and Abraham Lincoln, Philosopher Statesman (2014). Dr. Fornieri has won several teaching awards at RIT, including the Provost’s Award for outstanding teaching for junior faculty in 2002 and the Eisenhart Award for outstanding teaching for tenured faculty.

The annual lecture honors Judge David Aldrich Nelson (1932-2010), a charter member of AHI’s board of directors. Judge Nelson was graduated from Hamilton College, 1954, valedictorian of his class. He attended the Harvard Law School and read law as a Fulbright Scholar at Cambridge University, in England. President Ronald Reagan appointed him to the United States Court of Appeals for the Sixth Circuit in 1985. Judge Nelson took senior status in 1999 but continued to hear cases until he closed his chambers in 2006.

As the result of a recent gift from the family of Judge Nelson, AHI’s treasure room now houses some of his books and Hamilton College memorabilia.