In 2009, the Alexander Hamilton Institute for the Study of Western Civilization (AHI) partnered with the Department of Political Science, Baylor University, to host a summer seminar on “Machiavelli and Shakespeare: Alternative Visions of Modern Politics.” Michael Zuckert, Nancy Reeves Dreux Professor, and Chairman, Department of Political Science, Notre Dame University and Catherine Heldt Zuckert, also Nancy Reeves Dreux Professor of Political Science at the University of Notre Dame, served as discussion leaders. Two Baylor political science professors, Mary Nichols and David Nichols, took the lead in organizing the event, which was open to the public.

The success of the inaugural summer seminar, devoted to the study of great thinkers in the Western tradition, inspired annual others.  In each case Mary and David Nichols proved crucial in the planning and implementation of the event.  In honor of their efforts, spanning nearly a decade, AHI announced in 2018 that the annual summer seminar would be renamed The Mary and David Nichols Conference in the Great Books. 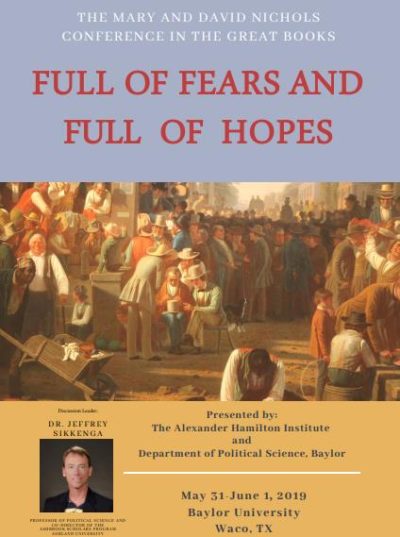 All of those associated with AHI understand the importance of tradition and of reclaiming and passing on those deposits of wisdom to the next generation.  In that spirit, Dr. Burns, who is also an AHI Senior Fellow, invited Dr. Debbi O’Malley, a Baylor Ph.D. in political science, to introduce Dr. Sikkenga. Dr. O’Malley performed her undergraduate work at Ashland University under the direction of Dr. Sikkenga.  She will hold the Daniel Patrick Moynihan postdoctoral fellow at Assumption College during the forthcoming academic year.

“This year’s AHI-Baylor conference,” was one of our most successful ever,” David Nichols observed. “Professor Jeff Sikkenga did a masterful job leading our two-day seminar. The discussion focused on Tocqueville’s concerns regarding the future of democracy in the United States, the resources available for defending a healthy form of democracy, and the ongoing problems we face.  Was Tocqueville and optimist of pessimist regarding our prospects?  We did not answer that question, but we did see why that question remains as vital today as it was in Tocqueville’s time.”

“The annual summer conference, co-sponsored with Baylor’s political science department, has evolved into one of AHI’s most successful and important programs,” observed AHI President Robert Paquette.  “I have witnessed firsthand the impressive passion and intellect that goes into the training of these young men and women. With reason does Baylor’s graduate program in political science rank as one of the best in the country. Mary and David Nichols have played a vital role building the graduate program.  They have passed the baton to Tim Burns, an impressive, consummate intellectual. AHI owes him and David Clinton, chairman of the department, a considerable debt. The summer conference provides a very special experience for the graduate students; I know of no other graduate program in political science that has anything like it.  As long as AHI endures, The Mary and David Nichols Conference will endure.”