The Alexander Hamilton Institute for the Study of Western Civilization (AHI) is pleased to announce that Patrick Deneen, David A. Potenziani Memorial College Chair, University of Notre Dame, will keynote this year’s Annual Undergraduate Conference on the American Polity, April 26-27, at Colgate University. AHI is co-sponsoring the event with Colgate’s Center for Freedom and Western Civilization. Dr. Deneen will speak on “Why Liberalism Failed.” 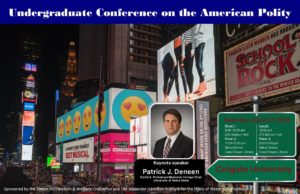 The schedule of events can be seen here.

The annual conference features outstanding undergraduate research from a variety of disciplines including history, economics, philosophy, anthropology, religion, political science, and sociology. Professors receive copies of the work beforehand and sit as commentators on the panels. Submissions by undergraduates concern in some way the principles and practice of American political life. This year’s presenters represent institutions from across the country.

The conference welcomes attendance by undergraduates who may not be presenting, but who are interested in participating as a member of the audience and in the special group discussion of a prescribed reading at the end of the conference.  Dr. David Dudrick, George Carleton Jr. Professor of Philosophy, Colgate University, will lead this year’s group discussion on “Is Nietzsche Right about the Christian Foundations of Our Values?”

Patrick Deneen holds a B.A. in English literature and a Ph.D. in Political Science from Rutgers University.  From 1995-1997 he was Speechwriter and Special Advisor to the Director of the United States Information Agency.  From 1997-2005 he was Assistant Professor of Government at Princeton University.  From 2005-2012 he was Tsakopoulos-Kounalakis Associate Professor of Government at Georgetown University. He joined the faculty of Notre Dame in 2012.

Deneen was awarded the A.P.S.A.’s Leo Strauss Award for Best Dissertation in Political Theory in 1995, and an honorable mention for the A.P.S.A.’s Best First Book Award in 2000.  He has been awarded research fellowships from Princeton University and the Earhart Foundation. His teaching and writing interests focus on the history of political thought, American political thought, religion and politics, and literature and politics. His published books include: Why Liberalism Failed (Yale University Press, 2018); Conserving America? Thoughts on Present Discontents (St. Augustine Press, 2016); Democratic Faith (Princeton University Press, 2005); The Odyssey of Political Theory (Rowman and Littlefield, 2000); Democracy’s Literature (ed.), (Rowman and Littlefield, 2005); The Democratic Soul (ed.), (University Press of Kentucky, 2011); and Redeeming Democracy in America (ed.), (University Press of Kansas, 2011).