The Alexander Hamilton Institute for the Study of Western Civilization (AHI) is pleased to announce that Professor Douglas Ambrose, the Carolyn C. and David M. Ellis ’38 Distinguished Teaching Professor of History at Hamilton College, will deliver the 2017 David Aldrich Nelson Lecture in Constitutional Jurisprudence.  He will speak on “Revisiting the Idea of a Godless Constitution.” The event will take place at AHI headquarters, 21 West Park Row, Clinton, NY, on Sunday, September 17, at 5:00 p.m. 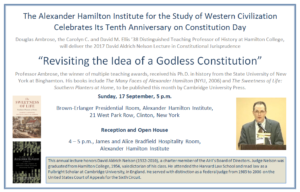 Professor Ambrose, the winner of multiple teaching awards, received his Ph.D. in history from the State University of New York at Binghamton. His books include The Many Faces of Alexander Hamilton (NYU, 2006) and The Sweetness of Life: Southern Planters at Home, to be published this month by Cambridge University Press.

A reception and Open House will precede the lecture from 4:00-5:00 p.m. at the AHI.   A reading cluster, open to the public, will follow Professor Ambrose’s talk.  AHI Resident Fellow Christopher Hill and AHI Executive Director Robert Paquette will hold the first session of a semester-long reading group, open to the public, devoted to the Nobel Prize-winning economist Friedrich Hayek and his famous book The Road to Serfdom (1944).

The annual lecture honors David Aldrich Nelson (1932-2010), a charter member of the AHI’s Board of Directors. Judge Nelson was graduated from Hamilton College, 1954, valedictorian of his class. He attended the Harvard Law School and read law as a Fulbright Scholar at Cambridge University, in England. He served with distinction as a federal judge from 1985 to 2006 on the United States Court of Appeals for the Sixth Circuit.